What is Laravel Dependency Management?

As many of us know, Laravel is a popular framework used for developing PHP applications.

Laravel is itself a package of packages, hence to develop our projects smoothly among the team members, dependency management is a must and composer does its work under the hood, silently but efficiently.

Read this article to learn how dependency management works in Laravel, so you can also take good advantage of it.

In this Article Below You Can Read About:

A Brief Introduction to the composer.json File Format

How to Install Packages using Composer in Laravel ?

Why You Should use the composer update Command Instead of composer install ?

The Importance of the composer.lock File When Using git

Dependencies are packages or third-party modules or plugins that are required for your project to run.

For instance, PHPUnit is an easy to integrate, standalone testing framework. So if your application needs unit testing and you use PHPUnit, that package becomes a dependency of your project.

Dependency management solves these problems of packages that rely on others by automating installation of your projects in and standardized way.

In JavaScript we use NPM, i.e. the Node Package Manager. For backend, Composer is a very popular dependency manager. 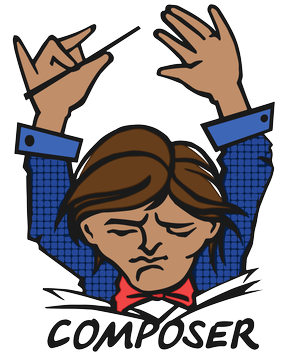 According to getcomposer.org's site official definition of Composer,

'Composer is not a package manager in the same sense as Yum or Apt are. Yes, it deals with 'packages' or libraries, but it manages them on a per-project basis, installing them in a directory (e.g. vendor) inside your project.

By default it does not install anything globally. Thus, it is a dependency manager. It does however support a "global" project for convenience via the global command.

This idea is not new and Composer is strongly inspired by node's npm and ruby's bundler.'

For those not familiar with Composer, this package is available to all major operating systems. On Windows you should use the Composer Setup file which can be found on the Getting Started page. For Ubuntu and Mac OSX, follow the below steps:

You will get composer.phar file in you project directory.

I prefer Composer to be accessible globally, so that I can run it from anywhere in my system, thus, to install Composer globally run this command with superuser privilege:

If you see something like below then consider a successful installation of Composer dependency manager.

A Brief Introduction to the composer.json File Format

As you know Laravel is a package of packages, means, Laravel is built of many packages altogether in a beautiful way that newbie developers forget about its working mechanism completely and perceive Laravel as a standalone application which is used for development of web applications and services, but this is not completely true because Laravel is dependent on various third party packages.

Back on the track now, you might have come across a file in your project directory, named as composer.json. Let's check it out once again:

This is a typical composer.json file. composer uses this file and another file called composer.lock. I will explain about this also later on in this post only, do not worry.

What I am going to show here is the key sections of composer.json file.

The require section tells composer to include the mentioned packages which are indispensable for the project to run on production i.e. whole application is dependent on these packages.

The require-dev section lists packages that aren't essencial for your project to work and shouldn't be included in the production version of your project.

Typically, these are packages such as phpunit/phpunit that you would only use during development.

If you want to dig more into it, you can find all the dependencies or in general, packages and their sub-packages mentioned in composer.json file in vendor directory of your Laravel project. That is why we need composer dependency manager in Laravel.

How to Install Packages using Composer in Laravel ?

Suppose, you need to install a package called dump-server, that collects all your dump call outputs, so that it does not interfere with HTTP / API responses.

You can install the package via composer:

Or just add an entry in require-dev section of composer.lock, like below

Then run below command in terminal

Why You Should use the composer update Command Instead of composer install ?

The composer update command will update your dependencies as they are specified in composer.json. For example, if you require this package as a dependency:

and you have actually installed the 0.9.1 version of the package, running composer update will cause an upgrade of this package (for example to 0.9.2, if it's already been released)

In sum the composer update command will:

The command composer install will not update anything. It will just install all the dependencies as specified in the composer.lock file

In detail composer install will do:

composer update is mostly used in the 'development phase', to upgrade our project packages according to what we have specified in the composer.json file.

composer install is primarily used in the 'deployment phase' to install our application on a production server or on a testing environment, using the same dependencies stored in the composer.lock file created by composer update.

The Importance of the composer.lock File When Using git

See the below example:

Did you notice that long string with key as reference? That is the actual commit version that was put in once composer followed the definitions in your composer.json file.

Well, I hope you have got my point. Your entire application dependency hierarchy can have their versions 'locked' in your composer.lock file.

Foremost, you should commit this file so that the packages you are using are exactly of same versions as your team pull your code locally.

Laravel is itself a package of packages, hence to develop our projects smoothly among the team members, dependency management becomes a must and composer does its work under the hood, silently but efficiently.

Decode Web » What does a code say about ?

This article was originally published by myself Dinesh Suthar at my site DecodeWeb.

No comments were submitted yet.